One of the of the driving forces behind the industry’s continued growth is the designation of more “geographical indications (GIs)” and sub-GIs, which recognize the unique terroir of specific wine growing areas in BC.

These are recognized as appellation areas that help people identify where the wines are from, and provide assurance as to their origin. GIs would be comparable to Italy’s DOCG or France’s AOC appellation programs. These encourage quality and promote agri-tourism.

Under BC’s Wines of Marked Quality Regulation, any wine bearing the VQA symbol must contain grapes that were 100 per cent grown within the province. For wines bearing a GI designation, 95 per cent of the grapes must originate from within that area, while five per cent can come from elsewhere in the province.

Many vintners have taken things a step further by producing single vineyard offerings or small lots that have stepped up overall quality and give BC wine enthusiasts a deeper “sense of place.” It is not unusual for individual vineyards to have unique soils and topography even within the same sub-GI.

In January 2022, Forbes magazine published an article describing this very phenomenon in the Okanagan Valley. It points to the region’s diverse geology as attributing to great complexity in its wines. Forbes describes the landscape as having been “shaped by complex processes of mountain building, volcanic eruptions, glaciation and erosion.”

“The result is a series of ancient soils composed of glacial till and eroded bedrock that are very heterogenous. It’s not uncommon for a small 10-acre vineyard to exhibit a half dozen or more different soil types.” 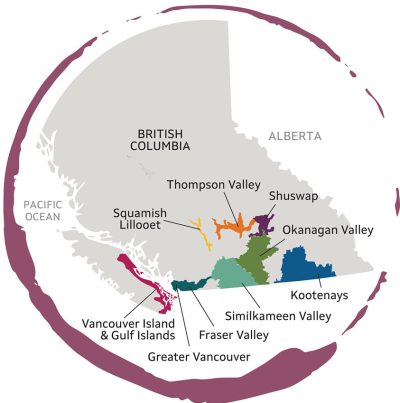 error: Content is protected, no content on this site may be reproduced without written consent of the publisher.